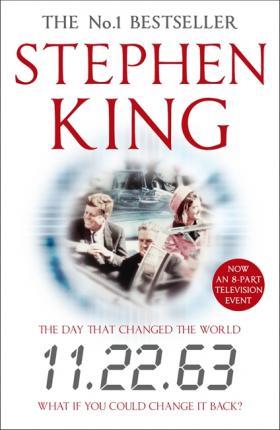 Now a major TV series from JJ Abrams and Stephen King, starring James Franco (Hulu US, Fox UK and Europe, Stan Australia, SKY New Zealand).
WHAT IF you could go back in time and change the course of history? WHAT IF the watershed moment you could change was the JFK assassination? 11.22.63, the date that Kennedy was shot – unless . . .
King takes his protagonist Jake Epping, a high school English teacher from Lisbon Falls, Maine, 2011, on a fascinating journey back to 1958 – from a world of mobile phones and iPods to a new world of Elvis and JFK, of Plymouth Fury cars and Lindy Hopping, of a troubled loner named Lee Harvey Oswald and a beautiful high school librarian named Sadie Dunhill, who becomes the love of Jake’s life – a life that transgresses all the normal rules of time.
With extraordinary imaginative power, King weaves the social, political and popular culture of his baby-boom American generation into a devastating exercise in escalating suspense.
Məhsulun kodu: 9781444727333
Janr: Thriller
Nəşriyyat: Hodder Paperback
Cild: Paperback
Çəki, g: 513
Müəllif: Stephen King
Səhifə sayı: 752