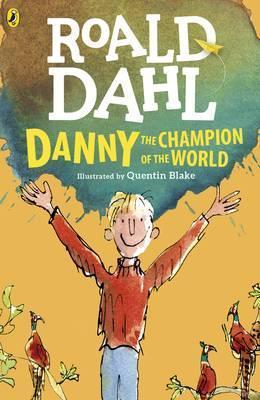 “A true genius . . . Roald Dahl is my hero” – David Walliams
Phizzwhizzing new cover look and branding for the World’s NUMBER ONE Storyteller!
Danny lives in a gipsy caravan with his father, the most marvellous and exciting father any boy ever had. All the land around them belongs to Mr Victor Hazell, a rich snob with a great glistening beery face and tiny piggy eyes. Nobody likes him, not one-little bit. So one day, Danny and his father concoct a daring plot that will give the old blue-faced baboon Victor Hazell the greatest shock of his life – so long as they don’t get caught …
Now you can listen to DANNY THE CHAMPION OF THE WORLD and other Roald Dahl audiobooks read by some very famous voices, including Kate Winslet, David Walliams and Steven Fry – plus there are added squelchy soundeffects from Pinewood Studios!
And look out for new Roald Dahl apps in the App store and Google Play- including the disgusting TWIT OR MISS! and HOUSE OF TWITS inspired by the revolting Twits.
Məhsulun kodu: 9780141365411
Janr: Books for Kids
Nəşriyyat: Penguin Books Ltd
Cild: Paperback
Çəki, g: 195
Müəllif: Roald Dahl
Səhifə sayı: 240