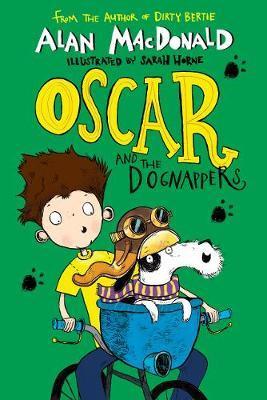 The second book in a brilliantly funny new series from bestselling Dirty Bertie author Alan MacDonald, about a boy and his incredible talking dog.
Oscar’s back . . . and he’s got plenty to talk about!
Sam had a very ordinary life, until Oscar the dog arrived on his doorstep. Because Oscar has a big secret – he can talk!
In Sam and Oscar’s second adventure, Sam’s dad wants the whole family to get involved in his new business idea (a cafe with a rather unusual menu), but Sam’s got other things to worry about when dogs start disappearing . . . can Sam and Oscar unmask the dastardly dognappers?
A warm and funny series of doggy adventures, perfect for fans of Spydog, My Brother’s Famous Bottom by Jeremy Strong, Horrid Henry and Pamela Butchart.
Alan MacDonald is the author of many books for children, including the bestselling Dirty Bertie series, which he worked on with award-winning illustrator David Roberts. His series Troll Trouble (Bloomsbury) has been optioned for film by Twentieth Century Fox, and Alan has also published picture book The Prince of Pants (Scholastic) with the illustrator Sarah McIntyre. When not busy with books, Alan writes for children’s TV series such as Horrid Henry, The Tweenies, Boo! and Fimbles.
Sarah Horne has illustrated many hilarious children’s books, including Llama United by Scott Allen (Pan Macmillan) the Fizzlebert Stump series by A.F. Harrold (Bloomsbury), the Guinea Pigs Online series by Amanda Swift and Jennifer Grey (Quercus) and Michael Rosen’s Laugh Out Loud Joke Book (Scholastic). Sarah grew up in Derbyshire and now lives in London.
Məhsulun kodu: 9781405287234
Janr: Family
Nəşriyyat: Penguin Books Ltd
Cild: Paperback
Çəki, g: 158
Müəllif: Alan MacDonald
Səhifə sayı: 160