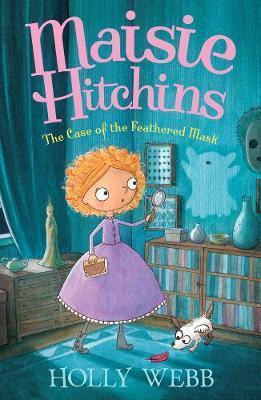 Maisie Hitchins longs to be a detective. She’s sure there are lots of adventures to be had on the streets of Victorian London. And, together with her faithful puppy, Eddie, she is determined to follow even the slightest scent of a mystery – no matter what!
In book four of the Maisie Hitchins series, Maisie finds herself coming to the aid of her friend Professor Tobin. The professor has travelled all over the world, collecting strange and wonderful objects. Now he plans to donate his collection to the British Museum – including a rare and valuable tribal mask from the Amazonian rainforest. But when a thief breaks into the boarding house and steals the Feathered Mask, leaving only a single feather, Maisie realizes she has a new mystery on her hands.
A new series by best-selling author Holly Webb, packed with mystery and adventure. Perfect for readers aged six to eight years.
Məhsulun kodu: 9781847154255
Janr: Mystery Books for Kids
Nəşriyyat: Little Tiger Press Group
Cild: Paperback
Çəki, g: 174
Müəllif: Holly Webb
Səhifə sayı: 176